At Ganja Outpost we’re thrilled to see a featured story of a member of the Cannabis Crew in a major US publication.

This month, in Outside Magazine, there is an article about our Brother, and founding member of the Cannabis Crew, Captain Raymond Grady Stansel.

The article tells some, but not all, of the story of one of the Original Partners of Skip Steele, and pioneers in the early days of Caribbean Cannabis Smuggling.

The story is well written and provides an intriguing look into Ray Stansel’s life as an Environmental Hero in Daintree, Australia during his time as a fugitive from US Cannabis smuggling indictments over four decades.

The piece described the life of an American fugitive named Raymond Grady Stansel Jr. In the 1970s, Ray Stansel was a master fisher­man who became one of Florida’s biggest pot smugglers, hauling gargantuan 12-ton loads hidden under piles of ­freshly caught fish. And then he pulled off one of the most dramatic vanishing acts of any outlaw in American history when he skipped bail, faked his own death, and reinvented himself in Australia as Lee Lafferty, tour operator and conservationist.

Since the summer of 2015, I’ve been trying to discover who Stansel truly was. What I ultimately learned—by digging through thousands of pages of court documents and interviewing his closest friends and family on two continents—is that the man lived not one extraordinary life but two….

In fact, it was hard to find a single friend or family member who was troubled by Lee Lafferty’s previous life as a pot smuggler; it even seemed to have made him a legend. “Some people were asking does it change my opinion of him,” Mick Casey, a river guide who worked for him, told me. “It makes me admire the bastard even more.”

People in Far North Queensland often talk about Lee as someone who found redemption: a man running away from a troubled past who transformed himself into a protector of one of the world’s most pristine natural habitats. “Reflecting on it now, it’s just what Australia’s all about,” said Norman Duke. “It’s all about redemption. All about finding a new life.”

Spend long enough in Daintree, and you might also hear another story. Sometime in the early 1980s, Lee and a doctor friend were driving along the road that links Daintree and Mossman. As they neared a small bridge, they spotted a car in the ­crocodile-infested creek below. A couple of guys were just standing around looking at it. Lee burst from his vehicle and quickly realized that someone was still in the floating car. He dove into the creek, pulled out the unconscious man, and dragged him onto the bank. By the time the police arrived, Lee was long gone.

Author Rich Schapiro does a nice job of interweaving threads of stories from both of Ray’s interesting lives. From cannabis smuggling legend to environmental hero, quite an adventure for one of the most genuine people we here at Ganja Outpost have ever had the pleasure of knowing…

In the future, we look forward to telling the entire untold story of Ray and his adventures with the Cannabis Crew.

Until that time, please enjoy the latest from Outside Magazine at this location. 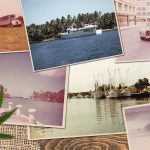 Stories of the Cannabis Crew on Herb.co!History, Updates