Captain Raymond Grady Stansel was an original player in the earliest days of Caribbean Cannabis Smuggling. With a career that was refined in the straits, bays and open ocean of the Gulf of Mexico and the Atlantic Ocean beyond, Capt. Ray defined the epitome of the peaceful, gentleman marijuana smuggler in the mid-60’s and early 70’s.

In the early 1970’s Capt. Ray joined forces with Skip Steele & Will Knox to form the Cannabis Crew, exporting massive scale operations of fresh Colombian Gold from the shores of Santa Marta Colombia back into the USA.

Capt. Ray and Skip Steele were partners, friends and brothers…learn more about this true gentleman smuggler in these words direct from Skip:

H e was known to us as Captain Ray. A truer gentleman could not have been found. Soft spoken, yet a big man physically, Ray was one of a kind. His skills on a boat were legendary, his prowess with a fishing pole unmatched. Accomplished at everything he did, he was a perfectionist yet he was humble. He was patient with newbies and polished with pros.

An example of his boating skills were found in the way that he operated his 46 foot sportsfishing boat, “Miss Sabrina” (call sign WZF2709). She was a single engine boat with a 15 foot beam and a full tuna tower, Ray could back her down into a slip with the wind blowing fifteen knots and the tide running against him at six knots. His control of boats under extreme ocean conditions was amazing. Ray could get onboard any boat and feel right at home, be it a power boat or sailboat. His skills came to life best when the seas were over twenty feet and the wind was howling, in the middle of the night and the engine just blew a gasket. He was unflappable and always in control. He had the knowledge and skills to pilot any size boat in any weather to any point, anywhere. Not many people can say they are true “Blue Watermen”, Ray was that to a fault.

Put a fishing pole in his hand and nothing in the sea was safe. His bottom and reef fishing skills could not be taught, he was born with a unique ability to “feel” the fish before it hit the hook. It was nothing for Ray to load the boat with grouper and snapper and then head offshore and fill the boat with dorado, of which he would not hesitate to share with everyone.

Ray was thought to have died in a scuba diving accident in 1974. However, earlier in 2015, it was learned that in fact, Ray had not died in Roatan, Honduras as first reported. In fact, Ray died in a traffic accident in his adopted home of Australia in May of 2015. Raymond lived his life on the sea, be it the Gulf of Mexico, Caribbean or the Coral Sea in Australia. As so many of his new friends in Australia commented and we here at Ganja Outpost agree, Raymond Grady Stansel was one of the good guys and a true gentleman, he will be truly missed by everyone that came to know him.

Stay tuned for the recollections about how Skip and Will met Capt. Ray for the first time, as well as other smuggling anecdotes from their adventures together.

Have a look at some of the international news related to Captain Ray: 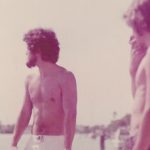